While the automotive insolvency level has been low compared to other industries in the past, an increase of up to 3% is expected in the coming 12 months. 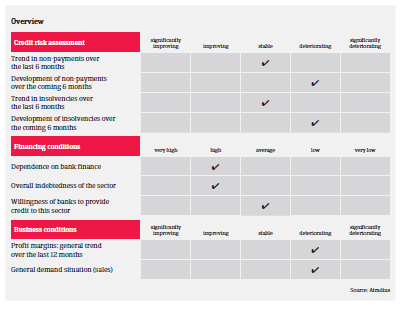 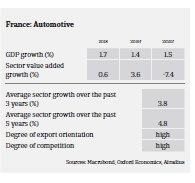 Timely payment is generally important in the French automotive industry, and the payment experience has been good over the past two years. However, this is about to change for the worse, as suppliers are facing tougher times ahead.

Since the end of 2018 difficulties in the French automotive industry have increased, mainly due to lower car sales (down 1.8% year-on-year in H1 of 2019 according to the European Automotive Manufacturers´ Association ACEA) and tighter environmental regulations (especially the world harmonised light vehicles test procedure, WLTP). This is mainly impacting smaller Tier 1 manufacturers and many Tier 2 businesses, with generally deteriorating turnover and shrinking profit margins, leading to serious liquidity issues for some smaller players.

We expect payment delays to increase in the coming 12 months. While the insolvency level has been low compared to other industries over the last couple of years, an increase of up to 3% is expected in the coming 12 months. Mainly affected will be smaller suppliers that are highly geared and positioned at the lower end of the value chain, i.e. engaged in foundry work, small stamping and/or producing items with low technology requirements.

The situation is also worrying for smaller French car dealers, where we forecast business failures to increase more than 3% year-on-year in 2019. Car dealers are impacted by significant pressure from OEMs, which provided them with many cars and high sales targets in 2018, while Diesel car sales have meanwhile deteriorated. Smaller dealers therefore have difficulties in financing their inventories.

For the time being our underwriting stance for OEMs and large Tier 1 suppliers remains open, as those businesses retain a strong risk profile, posting robust revenues and margins. But given the issues mentioned above we have turned more cautious since the beginning of 2019 when underwriting Tier 2 suppliers and smaller car dealers.

We expect that the impact of any US import tariffs on French carmakers and suppliers would be limited as the export share to the US is very low, with no change in credit risk for the industry.

Future challenges, but some mitigating factors

Regarding the challenges on the horizon (tighter emission standards/increasing e-mobility and digitalization), French Tier 1 and Tier 2 businesses are still lagging behind some international competitors in terms of innovation, but are speeding up to close the gap. Businesses benefit from government initiatives and funds that support financing innovations and increased R&D (e.g. digitalization). With a decreasing number of family-owned businesses and investors increasingly taking control, there is a shift towards more technical innovations (e.g. robotics) and export development.

As French OEMs are introducing cost-reducing measures in order to focus on investment in new technologies, they will, to some extent, increase pressure on subcontractors in the coming 2-3 years, requesting greater productivity and lower prices. However, unless unexpected events occur, we do not expect OEMs to overly pressure their suppliers in order to avoid supply chain disruption. This should be a lesson learned from the 2008-2009 economic crisis, when the purchase of insolvent Tier 2 suppliers by another company often had to be supported by OEMs with volume agreements.

There is a risk of deterioration if suppliers do not adapt their production to new needs and for the time being Industry 4.0 demand is not anticipated to drop dramatically. Therefore, while automotive insolvencies are currently rising, and the credit risk in the sector has increased, no sharp deterioration is expected in the coming 2-3 years.

Even larger consumer durables retailers could face troubles due to increased financial exposure after acquisitions and the difficult economic environment.

France: an increase in payment duration

After an increase from 43.5% in 2017 to 47.5% this year, France has the second highest percentage of overdue B2B invoices in the Western European region.

The currently rather good situation for French ICT businesses could quickly worsen, due to the fast changing and very competitive market environment.