With the oil price well below its fiscal break-even level of around USD 78, the government still faces the challenge of keeping a tight grip on spending. 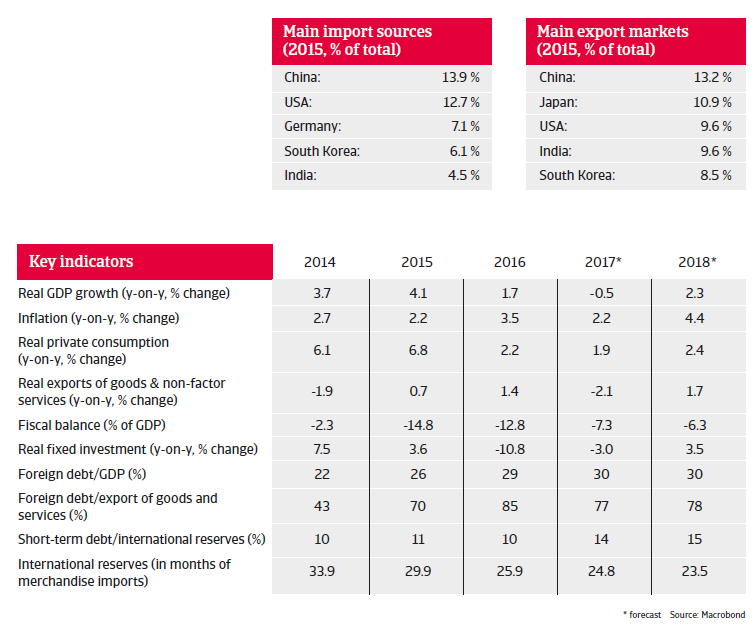 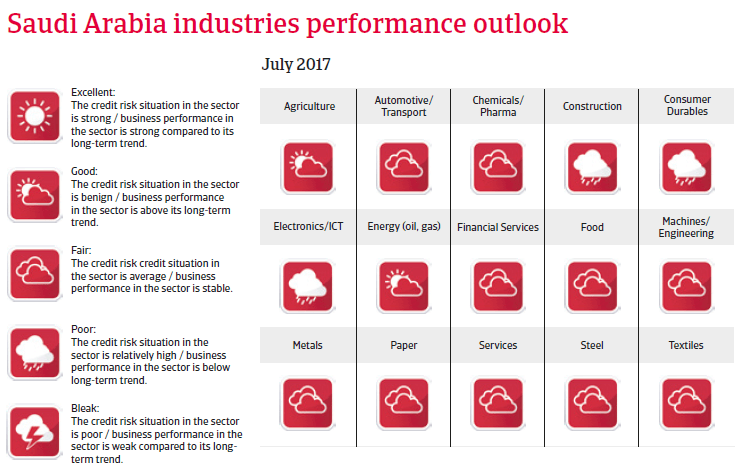 Population: 28.2 million (est.) - immigrants make up more than 30% of the total population

The on-going political turmoil in the Middle East is a challenge for the Saudi rulers, with major security problems due to the current situation in neighbouring Iraq and Yemen. Saudi Arabia feels increasingly challenged by growing Iranian influence, its traditional rival for hegemony in the Gulf region. Therefore, Saudi foreign policy has turned to become more assertive, mainly in order to counter Iranian influence, e.g. by supporting opposition (Sunni) forces in Syria and, since March 2015, by a direct military intervention in Yemen against the Houthi rebels, who as a Shia tribe are allegedly backed by Iran. Saudi Arabia most recently orchestrated a regional boycott of Qatar, including diplomatic and economic sanctions. This was a reaction to the country’s close ties with Iran and the Muslim Brotherhood and its suspicions of Qatar supporting terrorism.

Diversification away from oil-dependency on the agenda 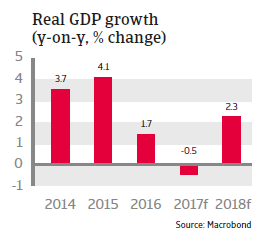 Saudi Arabia has an oil-dependent economy with strong government controls over all major economic activities. The sharp oil price decrease since 2014 had an especially negative impact on exports and state revenues. The share of oil in exports and in state revenue declined from about 85% in 2014 to 60% in 2016. Economic growth is expected to contract 0.5% in 2017, on the back of fiscal austerity, declining investment and a bigger than expected cut in oil production, following the agreement made at an OPEC meeting in November 2016, before recovering to a range of about 2% in the medium-term.

Support for economic activity comes from on-going large investments in infrastructure (metro Riyadh) and new industrial projects (e.g. Sadara petrochemicals complex). The banking sector is still sound and well capitalised, but the lower oil price has affected the financial sector through tighter liquidity. Credit growth has decelerated and banks´ balance sheets have deteriorated somewhat, but the level of non-performing loans is still low.

In 2015 the budget deficit increased to about 15% of GDP and remained at a double-digit rate in 2016 despite the imposition of austerity measures (including petrol price increases and comprehensive subsidy cuts), but is expected to decrease to 7.3% in 2017. Public sector pay cuts imposed in September 2016 were reversed in April 2017, probably in order to avoid public discontent (two-thirds of the Saudi workforce are employed in the public sector). This turnaround will keep the deficit at an elevated level, given that salaries and allowances account for about 45% of government spending. With the oil price well below its fiscal break-even level of around USD 78 in 2017, the government still faces the challenge of keeping a tight grip on spending.

The current account turned from high surpluses in previous years to a deficit of 8.7% in 2015 and 3.8% in 2016. That said, due to its very large international reserves, low public debt (22.3% of GDP in 2016) and easy access to international debt markets, Saudi Arabia is able to easily fund those deficits. Import cover has decreased (from 34 months in 2014 to 25 months in 2017), but is still high. The external financing requirement was only 19% of foreign reserves in 2016.

While Saudi Arabia is able to sustain high spending for some years, a structural shift to a long-term period of lower oil prices would at last pose a risk for the economy. Therefore, a comprehensive diversification of the economy away from oil dependency is high on the political agenda. In 2016 the government announced far-reaching reform goals in a “Saudi Vision 2030” plan, and has implemented a National Transformation Programme (NTP) accordingly. The aim is to transform the economy over the next 15 years to diversify growth, reduce the dependence on oil, assure the long-term sustainability of public finances, increase the role of the private sector and create more jobs. At the same time it is planned to privatise a 5%-stake in the state oil company Aramco in 2018 in order to fund a Sovereign Wealth Fund which will do part of its investments abroad. It remains to be seen if the political willingness to implement those far-reaching economic reforms will persist.

The industry remains affected by the slowdown in the country´s economic performance, which has led to lower investments and decreased public spending.

The price of oil has stabilised, largely thanks to OPEC’s shift in policy. The market is expected to rebalance in 2018 driving up prices in the medium term.

Due to the deterioration in demand competition has increased, as builders operate on lower margins in order to obtain the remaining available business.