The oil price has plummeted since the beginning of 2020 as the coronavirus is negatively affecting demand, while oil producers are entangled in a price war.

The oil price has plummeted since the beginning of 2020 as the coronavirus is negatively affecting demand, while oil producers are entangled in a price war.

With OPEC+ supply management keeping a floor on prices and the flexibility of US production effectively acting as a ceiling, the price of oil fluctuated within a range of USD 50 to USD 70 in 2019. Geopolitical tensions (including US-Iran tensions and attacks on Saudi processing facilities) brought prices to the upper limits of this range on several occasions, while lower demand pushed it to lower limits.

The price of Brent oil averaged USD 63 per barrel in 2019, but has declined from around USD 70 since the beginning of 2020. The outbreak of coronavirus in China and the subsequent lockdown affected demand and demand expectations, pushing prices about 20% lower in January. Those demand concerns were expected to be temporary, but instead have been severely compounded by supply-side developments. OPEC+, mainly Russia and Saudi Arabia, failed to agree on production cuts, and instead changed strategy to one pursuing market share, effectively sparking a price war. Prices have plunged to as low as USD 25 per barrel (see chart 1), another 40% lower (more than 60% down since the beginning of the year). The price decline has been exacerbated by the coronavirus becoming a pandemic.

The policy shift of OPEC+ is largely motivated by the resilience of US production. US oil output has been surpassing records and reached nearly 13 million barrels per day. Available US oil resources were estimated to be 35% higher in 2019 than in 2018, concentrated in the Permian basin. In the low-price environment, capital expenditure already declined 5% in 2019, and sector surveys predict another 11% decline in 2020. The national oil rig count (683) is down 18% year-on-year. With moderating investment, US output growth is slowing (see chart 2); dropping from 17.5% growth in 2018, to 13% in October 2019, according to most recent data from the US Energy Information Association (EIA). Overall, it is clear that the period of rapid growth is coming to an end for now, at historically high output levels and with larger-than-expected resources left to exploit.

Market turmoil expected to be temporary

Supply and demand of oil are inelastic in the short-term, allowing for such major price swings that are nearly impossible to predict. The oil price crashed in March 2020 due to two unexpected developments: lower demand due to the coronavirus outbreak and higher supply as OPEC+ scrapped their production caps. This has brought the short-term outlook for the oil price significantly lower than previously expected. EIA accordingly slashed its 2020 average oil price forecast by USD 21 to USD 43, and amid current uncertainty the Brent futures curve prices Brent around USD 55 in the late 2020s.

At this point, we believe current market volatility is a short-term phenomenon and will not persist in the long-term. For both Saudi Arabia and Russia, the economic consequences of the ongoing price war are substantial. OPEC’s strategy to maintain market share earlier this decade in the face of the US shale boom drove the price collapse in 2014. By November 2016, OPEC+ had changed direction to focus on market management to put a floor on prices.

The US oil sector has recently shown signs of weakness, as investments slow in the face of low profitability. Therefore, it is an opportune moment to begin pushing for market share. Higher reserves may allow countries like Saudi Arabia and Russia to continue this price war for some time, but we expect the economic realities will motivate a return to the negotiating table later this year. The escalation of the coronavirus crisis and its severe downward impact on oil demand could bring this on sooner rather than later. While output cuts may not be as substantial as in the previous arrangement, they will help put a floor under prices in 2020 and support gradually rising prices in 2021. Therefore, we expect the current market turmoil to be temporary, with prices increasing again as of 2021, towards USD 70 per barrel by 2025.

‘Fix the roof while the sun is shining’ is advice that oil exporters should have followed. The last crash in 2014/2016, when oil prices also briefly touched USD 30 per barrel, was a wake-up call. While in the immediate aftermath oil exporters stepped up fiscal reforms, the sense of urgency has been waning since then. Low economic growth and rising social unrest also triggered a shift towards more growth-oriented policies. Perhaps oil exporters also found comfort in the slow global energy transition, expecting the oil price to continue rising in the medium- to long-term.

For most fuel-exporting countries, oil and gas revenues remain a major part of government revenues (see chart 3). This especially applies to the Gulf States, but also to Equatorial Guinea, Brunei, Turkmenistan, Congo-Brazzaville, Angola and Azerbaijan. Despite fiscal reforms in some countries, including VAT introduction in Saudi Arabia, Bahrain and the UAE, the non-oil revenue base has only slightly broadened in 2019. 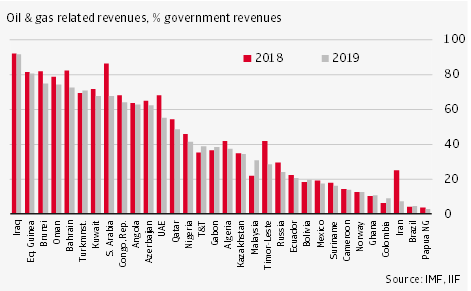 Reliance of public finances on oil income is difficult to fix without sufficient economic diversification, which proves to be a slow process. Fuel exports will therefore remain a dominant revenue source in the foreseeable future. With about 90%, Iraq, Angola and Algeria have the highest shares of fuel in their exports of goods & services.

Some countries are seriously working on diversification. The Gulf Cooperation Council (GCC) countries are developing their tourism industry, but at the same  time they (together with other countries) continue investing in the oil and gas sector. As a result, fuel export as a share of total export of goods & services has decreased below the 5-year average in 2018 (see chart 4) for only a few countries. Moreover, temporary oil production cuts imposed by the OPEC+ were partly responsible. Only for Bolivia, Cameroon, Kuwait, Oman, Russia, Timor-Leste and the UAE can this drop in the fuel share potentially be ascribed to actual diversification, as it was at least partly driven by a significant increase in the export of services and/or other goods than oil & gas.

Via a scenario analysis, using the Oxford Economics global economic model, we have assessed the short-term impact of an oil price of USD 30 per barrel on the budget balance for a selection of oil exporting emerging economies.

In the low oil price scenario budget balances of all countries would deteriorate substantially, with the most notable impact on those that rely most on hydrocarbon income for government revenues. Budget deficits of Kuwait, Iraq, Oman, Saudi Arabia, Algeria and Angola would widen to (near) double digits in 2021. Bahrain’s budget deficit appears to be less affected, but the low oil price would put its ambitious fiscal balance program off track. Its public debt ratio would continue to increase to almost 115% of GDP in 2021.

This is in sharp contrast with the medium-term scenario. Budget balances would generally improve, although in the medium-term there are still some countries for which the envisaged oil price increase alone is insufficient to stop the deterioration of macroeconomic imbalances. This would include Oman, Iran and Iraq.

Current account balances show a similar picture, which would mean a double blow to the persistent twin deficits of countries like Algeria, Oman and Ghana in the short-term.

Many fuel exporters will find it difficult to finance large short-term deficits. Saudi Arabia and Russia – the instigators of the price war - have sufficient financial buffers to stick to their guns for a while. Their public debt levels are relatively low, and ample international reserves are complemented by sovereign wealth funds (SWF). Azerbaijan, Brunei, Kazakhstan, Kuwait, Qatar, Turkmenistan, Timor-Leste and the UAE are also among the more resilient economies

However, the shock absorption capacity of the majority of fuel exporters is low and/or declining. Countries that already have elevated debt levels and weak external liquity positions like Bahrain, Oman, Angola, Ecuador and Nigeria are potentially among the first in trouble. 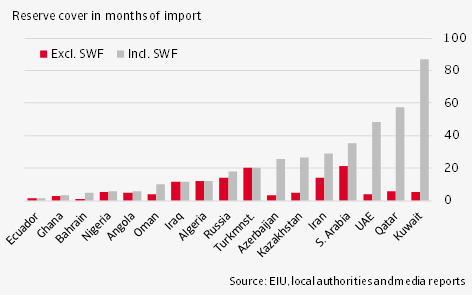 Ecuador and Bahrain have the lowest international reserve levels (see chart 6) and are especially vulnerable to dollar shortages, due to a dollarised economy (Ecuador) and a currency peg (Bahrain). Oman’s reserves are insufficient to defend the USD peg for long, and its modest SWF only provides limited additional buffer against its rising external financing requirement. Financial buffers of various African fuel exporters, including Angola, Ghana and Nigeria, are also weak. For sanction stricken Iran and politically instable Algeria and Iraq the low oil price comes at a bad time, as their official reserves could quickly erode.

Instability in the Gulf region is looming

If the current situation with an exceptionally low oil price turns out to be prolonged, multiple oil exporting countries would face financial stress. Implementing necessary rigorous fiscal reforms will be difficult at a time when many governments also need to provide a fiscal impulse to stimulate economic growth and alleviate the impact of the coronavirus outbreak. Some countries could therefore be in need of international liquidity support. Ecuador has already announced that it will start negotiations with its creditors, while the IMF and other multilateral agencies have indicated that they stand ready to support the country.

We remain most concerned about Bahrain and Oman, because of the exceptionally high fuel revenue dependence of these countries, in combination with high and rising debt levels and persistently low financial buffers. Moreover, any sovereign default of one of those countries would have massive regional spillover effects and could lead to financial and even geopolitical instability in the Gulf region. This is something that Saudi Arabia cannot afford, as it would also put pressure on its own US dollar peg, while defending this peg would accelerate the depletion of its foreign reserves.

Therefore we expect that in case of liquidity stress in Bahrain or Oman, Saudi Arabia will probably jump to the rescue, although its relations with the latter are more ambiguous. Riyadh has already provided substantial financial aid packages to both countries in the past. The latest USD 10 billion package of Gulf neighbours to Bahrain was conditional on stringent fiscal reforms. This time Saudi Arabia may be even less enthusiastic about providing neighbourly support, because it is also under financial pressure. However in the end it will.

Despite increasing clouds on the horizon, there remain several bright spots for export opportunities in emerging markets.

Corporate insolvency growth to accelerate in 2020

Corporate insolvencies are expected to grow 2.4% in 2020, a pronounced acceleration from the 1.4% increase recorded in 2019, largely resulting from the coronavirus outbreak

Iran continues to demonstrate economic resilience but prospects for integration into the world economy remain far off.