This positive outlook is underpinned by the synergy between robust private consumption and significant growth in exports. However, Slovakia remains very vulnerable to a downturn in the Eurozone, the main destination of its industrial exports.

Respondents in Slovakia appear to be the most inclined in Eastern Europe to offer consumer credit to their B2B customers domestically and abroad. Based on survey findings, 91.5% of the total value of respondents’ B2B sales was reported to be made on credit (up from 51.4% last year). This is markedly above the 67.2% average for Eastern Europe, and is the highest in the region. The notable increase in sales to B2B customers transacted on credit terms by Slovakian respondents is likely to be a reflection of the recent upward trend of private consumption, which is expected to remain the key driver of growth in the coming months. Furthermore, it may reflect dynamic export flows, which increased significantly over the past few years, partially due to substantial investments in the manufacturing sector, the core export sector of the Slovak economy. 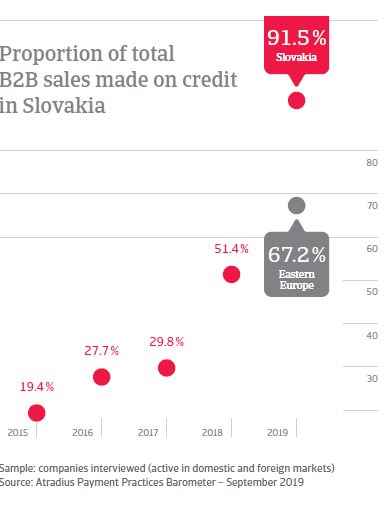 Despite being the most inclined to offer customer credit in B2B trade, and being far more likely to sell on credit than one year ago, respondents in Slovakia do not appear similarly oriented towards setting more relaxed payment terms. Most Slovakian respondents (77%) requested payment of invoices from B2B customers on average within 33 days from invoicing (compared to 31 days last year). This is below the 37-day regional average. The substantial stability of the payments terms granted by Slovakian respondents point to a strong focus on securing a trade-off between the benefits and costs of offering customer credit.

In line with the increased supply of trade credit, Slovakian respondents focus on ensuring that the costs of extending credit do not outweigh the benefits. This may explain why they are far more active (57% of respondents) than their peers in Eastern Europe (36%) in using dunning letters (outstanding invoice reminders). This may also be why far fewer respondents in Slovakia (5%) than in Eastern Europe (12%) use professional collections services to cash in their outstanding receivables. However, prior to any trade credit decision, a risk assessment of prospective customers is performed by respondents in Slovakia far more frequently (53%) than by their peers in Eastern Europe (39%). This finding corroborates that seen earlier in regards to the strong focus of Slovakian respondents on securing a trade-off between the benefits and costs of the extension of customer credit.

Far more respondents in Slovakia (81%) than in Eastern Europe overall (60%) expect the payment practices of their B2B customers to remain unchanged over the coming months. However, should customer payment practices deteriorate, Slovakian respondents say they would respond by intensifying their assessments of customer creditworthiness and by focusing on collecting overdue payments. As the Slovakian banking sector is generally well-capitalised and supportive of businesses’ borrowing requests, 75% of respondents in the country do not expect access to bank financing to become more difficult over the coming months. However, should economic activity slow down causing operational cost increases, 53% of Slovakian respondents would restrict growth due to shortage of capital and 40% would reduce workforce through layoffs or hiring freezes. 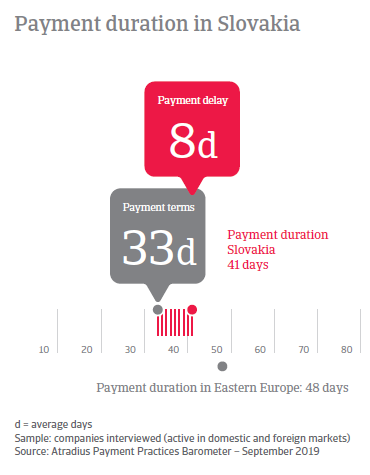 Overview of payment practices in Slovakia

Payment terms granted by Slovakian respondents to B2B customers in the machines sector are the longest observed in the country (averaging 44 days up from 33 days last year). This is likely a reflection of efforts from businesses in the sector to remain competitive on foreign markets by extending longer timings for invoice settlement. Respondents in the construction sector set the shortest payment terms (averaging 28 days), which remained stable compared to one year ago.

Trade credit risk is highest in the Slovakian construction sector

With one quarter of the total value of B2B invoices remaining unpaid at the due date, the Slovakian construction sector shows the highest level of trade credit risk on the domestic market. The most marked improvements in the speed of payments from B2B customers were observed in both the agri-food and ICT/electronics sectors. Payment practices of B2B customers in the Slovakian consumer durables sector remained substantially unchanged.

Proportion of uncollectable receivables is highest in the chemicals sector 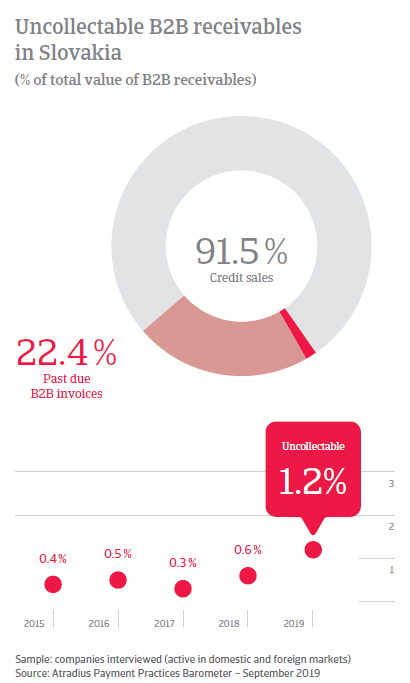 Consistent with the improvement in the average time it takes Slovakian respondents to cash in past due invoices, micro enterprises in Slovakia are now the quickest in collecting past due payments. This occurs on average 31 days after invoicing, compared to 43 days last year. In contrast, it takes SMEs 46 days (up from 44 last year) and large enterprises 54 days (up from 41 last year) to turn past due invoices into cash.

SMEs in Slovakia appear to be comparatively less efficient than micro and large enterprises when it comes to collecting long-term outstanding receivables. Over the past year, write offs of uncollectable accounts from Slovakian SMEs saw a significant increase to 1.3% compared to 0.4% last year. In contrast, large enterprises experienced a fairly modest increase in the proportion of receivables written off as uncollectable (by 1.2% up from less than 1% last year). The level of write-offs of uncollectable accounts in micro enterprises remained stable over the past year at 1.1%.

Economic growth in Eastern Europe is projected to remain solid this year, despite losing steam mainly because of poor growth prospects for Turkey.

Payment duration in the Slovakian automotive sector ranges from 45 to 90 days, and the payment experience has been good over the past two years.